Preview Mode Links will not work in preview mode

Welcome to the Billionaire Lifestyle Podcast with Emmitt Muckles. You may also visit emmittmuckles.com for more information. 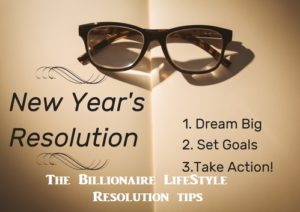 Rules and inspiration to have successful New Years Resolution Outcome!

Every year starting January 1st, millions of people make these traditions New Year Resolutions. The internet is full of "How To: New year Resolution 2017 tips", tricks and motivations. I'm here to add one more to the pot. Let me tell you I have made my share of New Year resolutions, followed by forgetting them before the month of January of almost every single time. Here is the situation, while I may have made resolutions to lose a few pounds, quit smoking , save money or be a better person, January was the starting point or the birth of an idea. What truly happen was the resolutions were changes I really needed to make in my life. While I usually failed immediately, the seed was planted.

Rule # 1: its good to make New Years Resolutions, because you are planting the seed.

Since the seed has been set and you may not have the will power to carry through to the end with your goal immediately, never give up. I required years for me to give up smoking cigarettes, but eventually I did. First you my really be disgusted with the motivation to make the resolution. For me I was sick of my entire being smelling like a Newport Lite. It was also the growing negative image along with being a smoker that made me want to stop smoking.

The reason most people fail to reach or be successful  with their resolutions is due to a simple single reason. They are not ready to change or give up the habit or make a change. Facing the facts of the human dynamic, we really don't like change very much. Unless you have an extremely strong motivator doing something different is tough. As an example we all know we may need to lose weight, but unless someone tells you there is a free trip to Hawaii if we could lose ten pounds, that eight ain't going nowhere. So its important to find your motivation to make your resolution resonate strongly.

If there is one thing I know, it's easier to walk up a hill than to do it in a single jump. Many times we have lofty aspirations and see the end result,  but fail to plan each measurable step. My favorite question. How does an ant eat an elephant?....One bite at a time. If you are trying to lose weight, pick and attainable number then set incremental benchmarks, let's say, a pound every ten days. You can reach that with ease and not feel stressed. Please don't try to drop 40 pounds in a month, pace yourself. The very minimum goal window should be 90 days segments for weight loss, followed by another three months to the next bench mark if there is a large number to be met as the goal.

Rule number #4 Write it down and tell ten people, or at least 5 people you often are with.

Writing down goals makes them physical and not just a fleeting thought. Place little notes of your statement where you can see them. These will be your inspirations and reminders. If you tell several people of your goals, they will overtly and subtly hold you accountable.

If at first you don't succeed, try again. Sometimes the first time you try something you are just having a learning moment. Nothing is usually perfect the first time anyway. Why not do Resolution version 1.5 up to version 5.0, it will surprise you what you can accomplish with multiple attempts. Now go live The Billionaire Lifestyle 2017

We all have the potential to live the lifestyles of our dreams. To live that life requires planning, action, and purpose. What is the lifestyle you dream of and it can't be a statement of "I just want to be rich", that sets the bar too low and non-specific? Let's explore the map and the journey to reach the Lifestyle destination. Find your mentor on the Podcast.